Bulletproof Super Density Board As Strong As Steel

In the ballistic experiment, it was determined that the board that deflected the bullet from its range was bulletproof.

A grade of wood that is as durable as steel but six times lighter than steel could be used as a renewable building material in the future.

These reinforced timbers, which the researchers compared to carbon fiber, can be used in everything from construction to cars and bulletproof vests.

The scientists, who put the material to ballistic testing, found that the laminated (layered) version of this material even stopped lead.

To make this super-density board, engineers from the University of Maryland boiled piles of ordinary wood in a water-based solution containing sodium hydroxide and sodium sulfate.

With this process, the organic components in the board were destroyed, and the board turned into a more flexible and robust shape.

The process the researchers used is similar to the process used to make paper from wood. 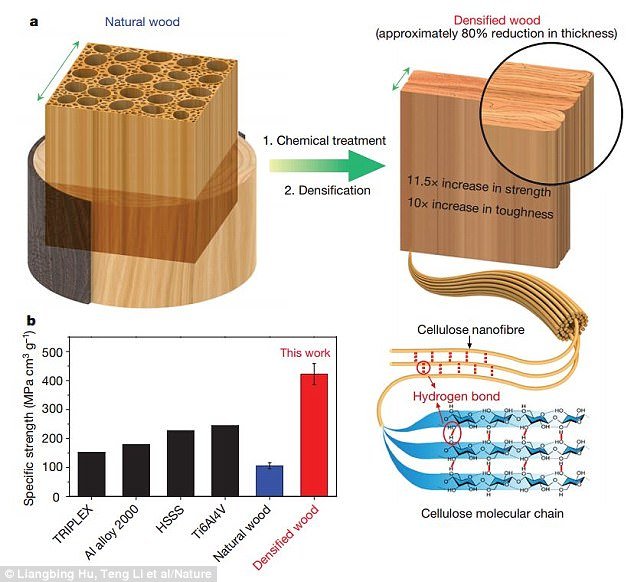 Then, squeezing the softened wood between two metal plates, the research team heated it to 100 degrees under a pressure fifty times higher than the Earth’s atmosphere.

Thus, the spaces between all the cells in the board are stuck together.

The applied pressure caused a chemical bond to form between the atoms that make up the cellular structure of the wood.

After the application of the process, the density of the board, which narrowed to one fifth of its original thickness, increased by three hundred percent.

Liangbing Hu, who led the research, says: “With this new process applied to wood, we get a material that is 12 times stronger and 10 times harder than natural wood.”

The team, which had previously produced a range of technologies made of nanocellulose-related materials, has thus produced super-clean paper that can replace plastics, photonic paper that increases solar cell efficiency by thirty percent, and transparent board that can be used in energy-efficient buildings.